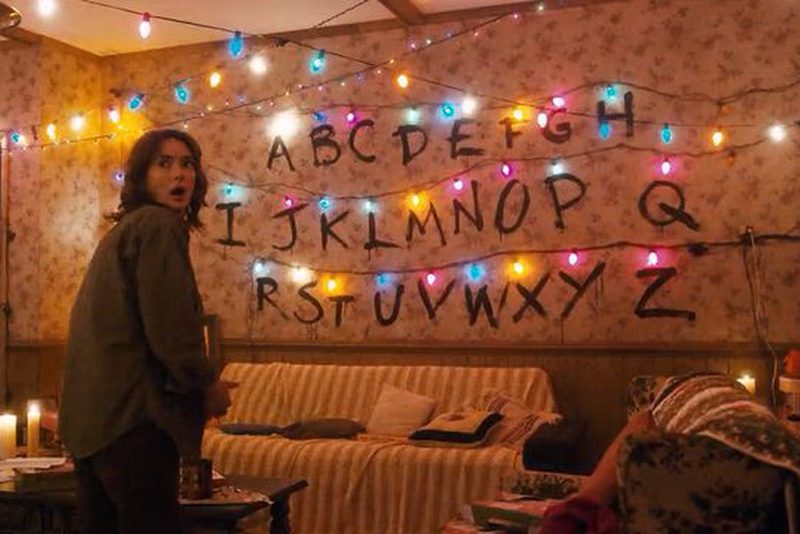 "If you haven't taken the time to watch Netflix's Stranger Things yet, we probably can't be friends," she says with total seriousness.

I binge-watched the first season in one sitting a couple days after its release on Netflix. And I told everyone about it.

I told the people I worked with, I told my family and friends, I told random people dining next to me at Chick-fil-a. If I heard someone talking about it in public, I weaseled my way into the conversation. If someone posted about needing a Netflix suggestion, there I was to recommend Stranger Things.

It's set in the eighties, which is my favorite era. The fashion, music, and lingo are perf-- uh, bitchin'. The casting is flawless. The filming and cinematic components make the show so visually appealing. The storyline is intricate and unique. And nothing hypes me up more than the intro sequence.

I could go on forever about this show, but that's not the point of this post.

I was scrolling through Facebook one day and stumbled upon a video highlighting a Stranger Things themed pop-up bar in DC. I thought about how cool it would be to go, but knew I wouldn't be going to DC anytime soon.

Right after Christmas, my boyfriend and I had a few days off and decided to drive up to Boston from Jacksonville to visit his family. As fate would have it, my family was staying in DC the weekend we drove up, and their hotel made the perfect mid-way stopping point on our long road trip. What are the odds???

So we got to the hotel room, dropped off our luggage, and headed to Miracle on Seventh Street.

Miracle on Seventh Street is composed of three adjoining bars: Mockingbird Hill, Eat the Rich, and Southern Efficiency. These bars go above and beyond for their holiday decor, which creates one very festive bar crawl. Game of Thrones is probably the most notable theme the bars have done; they had their own Hall of Faces, smoke-breathing dragon, and infamous Iron Throne.

These bars do not play around with their decor, and the Stranger Things themed one was no exception.

Yelp reviewers all claim they had to wait in a long time to get in, but we walked right in. Fate???

Eat The Rich was where the Stranger Things bar was set-up. It was long and narrow. On the left wall was the bar, and on the right, a hand-painted alphabet with colorful lights, the same lights on Joyce's wall. There was a memorial set up for Barb (RIP), and the ceiling was covered with the same colorful stringed-lights. As if the decorations weren't enough, there was a little show every 30 minutes where the lights would flicker and then go out, music would blare, then the lights on the wall lit up over the letters R, U, and N. But wait there's more...

This bar had a freaking robotic wall that moved, like a demogorgan was about to burst through! It was amazing. There were so many little details throughout the venue that showed serious planning, like a box of Eggos casually sitting on a shelf behind the bar.

As far as the actual bars go, the service was prompt and the bartenders were all friendly. Seats were difficult to find at the actual bar, but there was plenty of seating elsewhere. Drinks were a little pricey, but I expected it because these are novelty bars in DC. A little pricey being about $13, which isn't even that expensive (have y'all ever been to Sugar Factory? Try $50 for a single drink...). There were specialty cocktails the bars created around the themes, as they do for each new pop-up bar.

Overall, it was an amazing experience. Being such a big Stranger Things fan, I was able to appreciate all of the hard work that went into the set-up. These bars do cool things throughout the whole year, so definitely keep them in your back pocket if you are ever in the DC area!

Why Everyone Should Study Abroad
10 Must-Have Travel Apps